Hello everyone from “History in 3 Minutes Podcast.” Welcome back! Today, let’s take another look at “The Civil War.” It continued with the use of new kinds of technology and the different ideologies between the southern and northern states. 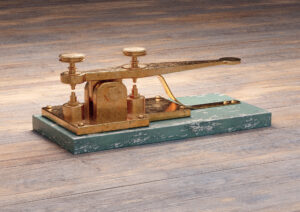 There was a faction within the Democratic party known as the “War Democrats”. They supported slavery and were willing to go to war to save the Union. The Republican main party wanted to end slavery and go to war if necessary to preserve the Union.

A major disagreement between the Republicans and Democrats was that of conscription. The Republicans wanted to force people into military service through a draft while the Democrats were against the draft.

The Civil War saw the usage of new technology as an advantage. Conoidal bullets made gunfire more accurate and created more casualties. The telegraph was invented prior to the war. Generals used it to know the results of battles immediately and change their orders quickly. Both sides used balloons to observe enemy troops. And both sides built steel steamships. These ironclads replaced the wooden ships used in earlier wars.

President Lincoln supported General Scott’s strategy called the Anaconda Plan. It was named after the snake that slowly strangles its prey to death. The plan called for a naval blockade of the Confederate ports, taking control of the Mississippi, and overtaking the south by Union land and naval forces.

So, Homeschoolers: your vocabulary words to look up today are draft, conscription, ironclads, Anaconda Plan, and blockade.

Older students: Write each vocabulary definition five times. Sketch an illustration and write a short summary. Imagine you are living during the Civil War. Explain the Anaconda Plan and use of new technology. Explain what you would do and why.

Extra credit for Homeschoolers: Sketch/color an illustration. Read “The Pied Piper” in Learning to Read: Fairy Tale Adventures. What do you think the children learned from the Pied Piper? Write what you learned in your podcast today.