Who Am I? This group of African American pilots fought in World War II (group formed by U.S. War Department on March 19, 1941)

These military aviators served in the United States Armed Forces. They shot down three German jets in a single day. On January 16, 1941, it was announced that an all-Black fighter pilot unit would be trained at the Tuskegee Institute in Alabama, a historically black college founded by Booker T. Washington. 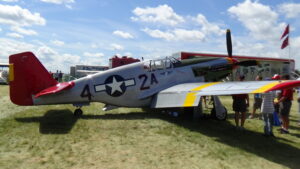