The ceiling of the Sistine Chapel in Rome, one of Italian artist Michelangelo’s finest works, was exhibited to the public for the first time on November 1, 1512. 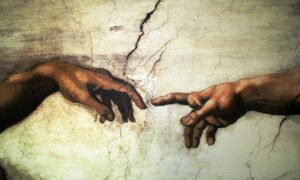 Michelangelo Buonarroti, the greatest of the Italian Renaissance artists, was born in 1475 in Caprese.  Michelangelo grew up in Florence, a center of the early Renaissance movement. He became an artist’s apprentice at age 13 and was taken under the wing of Lorenzo de’ Medici, a great patron of the arts. Michelangelo created the sculptures known as the Pieta (1498) and David (1504). The Vatican, Pope Julius II, called him to Rome in 1508 to paint the ceiling of the Sistine Chapel.

Michelangelo’s epic ceiling frescoes are among his most memorable works. The ceiling features nine panels devoted to biblical world history. The most famous of these is The Creation of Adam. In this painting the arms of God and Adam stretch toward each other.

Homeschoolers: sketch an illustration and describe the artwork.