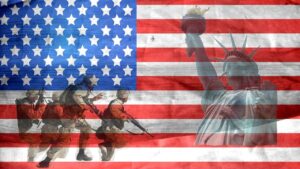 O say can you see by the dawn’s early light,
What so proudly we hailed at the twilight’s last gleaming,
Whose broad stripes and bright stars through the perilous fight,
O’er the ramparts we watched, were so gallantly streaming?
And the rockets’ red glare, the bombs bursting in air,
Gave proof through the night that our flag was still there;
O say does that star-spangled banner yet wave,
O’er the land of the free and the home of the brave?

The Star-Spangled Banner, our national anthem, came from a poem written by Frances Scott Key. The song officially became our country’s anthem when President Herbert Hoover signed it into law in 1931.

Homeschoolers: Sketch/color an illustration and record your observations of this historical event.