Hello everyone from “History in 3 Minutes Podcast.” Welcome back! Today, let’s take a look at “Manifest Destiny and the War with Mexico.” A dispute over land rights led to a war between Mexico and the United States. 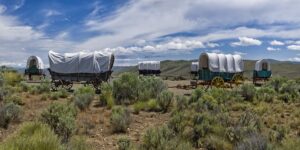 Beginning with the 1830’s, settlers moved west. Most citizens living in America believed in something called the Manifest Destiny. Manifest Destiny was the idea that the nation was meant to spread all the way to the Pacific.

Many newcomers flocked to the west with some settling in California which at the time belonged to Mexico. They traveled the Overland Trails which included the Oregon Trail, California Trail, and Santa Fe Trail.

Mexico closed its borders in 1830 to prevent further immigration. Tensions grew between the United States and Mexico. Davy Crockett took part in the Texas revolution. In 1836 Texas fought Mexico for its independence in the Battle of the Alamo with Mexico victorious. Mexico was later defeated at the Battle of San Jacinto.

In 1845 congress allowed Texas to become part of the United States. This did not set well with Mexico. The two countries disputed the southern border of Texas. At the same time, residents in northern California renamed the region independent and called it the Bear Flag Republic.

So, Homeschoolers: your vocabulary words to look up today are Manifest Destiny, Davy Crockett, Mexico, immigration, and treaty.

Older students: Write each vocabulary definition 5 times. Sketch an illustration and write a short summary. Imagine you are living during the Mexican American War. Explain which side you would support and why.