Hello everyone from “History in 3 Minutes Podcast.” Welcome back! Today, let’s take a look at “Growing Division and Reform.” The practice of slavery was morally wrong and divisive for the nation. In 1819 the union consisted of 11 free states and 11 slave states. Tensions intensified when Missouri applied for statehood. The northern states believed slavery was morally wrong. Many of the large plantation landowners in the south supported slavery. At the same time, Maine also applied for statehood as a free state. This request by itself did not satisfy the dispute over the westward expansion of slavery. 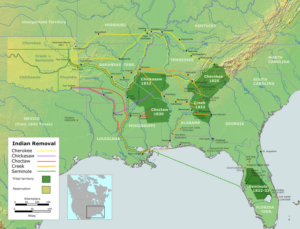 Henry Clay led the bill called the Missouri Compromise through the House of Representatives in 1820. The senate decided to admit Maine as a free state and Missouri as a slave state. The compromise also banned slavery from any future territories or states north of Missouri’s southern border. The Missouri Compromise marked the beginning of the prolonged sectional conflict over the extension of slavery that eventually led to the Civil War.

With more people moving into Georgia a conflict erupted between the settlers and the Cherokee. The government wanted to remove the Cherokee from their lands. The Cherokee took their case to the Supreme Court. Chief Justice Marshall supported their appeal in the Cherokee Nation v. Georgia (1831) case. Sadly, this opinion was not honored by the government.

This led to a forced relocation of Native Americans from their homes in Georgia all the way to Oklahoma. In 1838, the Cherokee marched more than 1,200 miles to Indian Territory. On this journey, known as the Trail of Tears, more than 2,000 Cherokee died of starvation, disease, and exposure.

So, Homeschoolers: your vocabulary words to look up today are Missouri, compromise, Cherokee, trail, and tears.

Older students: Write each vocabulary definition 5 times. Sketch an illustration and write a short summary. Imagine you are a lawyer living in America between 1820 and 1838. How would you represent slaves and the Cherokee nation?