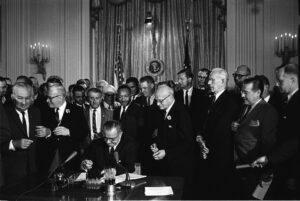 President Lyndon B. Johnson pushed the Civil Rights Act of 1964 forward after President Kennedy was assassinated. After a 54-day filibuster, it passed the United States Senate. The Civil Rights Act was signed into law by President Johnson at the White House on July 2, 1964. This law ended the legal separation of people by race in public places. Martin Luther King Jr. and other activists watched the president sign the bill into law.

Homeschoolers: draw/color an illustration and record your observations of this current event.