Hello everyone from “History in 3 Minutes Podcast.” Welcome back! Today, let’s take a look at the “New Republic.” In the early days of the new republic, new laws were enacted to protect the rights of the people from oppression and a tyrannical government. Congress created the Department of State, Department of the Treasury, and the Department of War along with the Office of Attorney General in 1789. The first elected president, George Washington, chose his cabinet. The members of his cabinet headed the departments and were advisors to the president.

Congress also organized the judicial branch. The Judiciary Act of 1789 outlined the makeup of the Supreme Court and created the lower courts. John Jay became the first Supreme Court Justice. 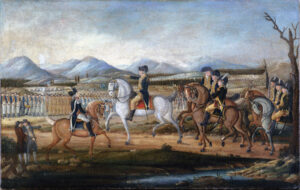 In 1789 the Bill of Rights was added to the Constitution. It was founded on the freedoms protected in the Magna Carta (1215), English Bill of Rights (1689), Virginia Declaration of Rights (1776), and Virginia Statute for Religious Freedom (1786).

The national bank was created under the necessary and proper clause of the Constitution. The implied power was that the government needed to collect money to regulate trade, collect taxes, and provide for the common defense.

Taxes were put on whiskey. This angered the farmers who rebelled. The Whiskey Rebellion was shut down by federal troops.

The election of 1800 was a tie with Burr and Aaron each having 83 elector votes. After many days and 35 rounds of voting, the House of Representatives finally declared Thomas Jefferson the president and Aaron Burr the vice-president. To prevent any further confusion in federal elections, amendment #12 of 1804 created separate ballots for president and vice-president.

So, Homeschoolers: your vocabulary words to look up today are republic, bank, clause, implied, and ballots.

Older students: Write each vocabulary definition 5 times. Sketch an illustration and write a short summary. Imagine you are a member of the House of Representatives. Write down what laws you would make or propose.