Hello everyone from “History in 3 Minutes Podcast.” Welcome back! Today, let’s take a look at “The Reform Movement.” Church revivals and temperance groups were organized to help improve society. Women and African Americans organized themselves politically to fight for equal rights. 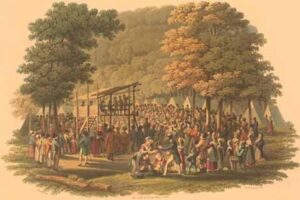 During the Second Great Awakening (1795-1835) camp meetings were held by various religious groups to help their members recommit to God. Methodists, Baptists, and Presbyterians sang, prayed, and shared their spiritual experiences with others during these revivals. The Church of Jesus Christ of Latter-day Saints was organized in 1830. The members were misunderstood and chased out of Nauvoo, Illinois.

Benevolent societies sprang up to help improve people. Temperance groups formed across the country teaching the evils of alcohol. Some towns prohibited the sale of alcohol within their boundaries. The temperance movement promoted the idea that drunkenness must be avoided.

Women and African Americans still did not have the right to vote in the 1800’s. The activist, Elizabeth Cady Stanton, proposed suffrage, or the right to vote, for all women at the Seneca Falls Convention in 1848. Abolition, or the end to slavery, gained momentum at this time. Frederick Douglass published an anti-slavery newspaper called the North Star. Sojourner Truth became a great orator with her religious antislavery speeches.

So, Homeschoolers: your vocabulary words to look up today are awakening, revivals, temperance, suffrage, and abolition.

Older students: Write each vocabulary definition 5 times. Sketch an illustration and write a short summary. Imagine you are living during the Second Great Awakening. Explain which groups you would support and why.