Hello everyone from “History in 3 Minutes Podcast.” Welcome back! Today, let’s take a look at the “War of 1812.” One of the events leading up to the War of 1812 was the routine kidnapping of American ships by the British. Once captured, the American sailors on the ships were forced to serve in the British navy. 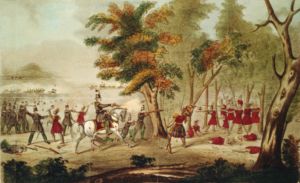 The United States put pressure on the British to stop the practice of impressment with economic sanctions. This did not deter the British. They continued to violate U.S. Maritime rights.

As a result, President James Madison signed into law the declaration of war after heavy pressure from the War Hawks in Congress. On June 18, 1812, the war began.

In 1813, the United States won the Battle of Lake Erie, gaining control of the lake and Detroit. They also defeated Tecumseh’s Confederacy at the Battle of the Thames in Ontario, Canada.

However, the British set fire to the White House and U.S. Capitol in Washington D.C. The American response was to build up the defense at Fort McHenry which guarded the Baltimore harbor.

Fort McHenry’s new commander, Major George Armistead, asked for a large flag to fly above the fort. He wanted the British to have no difficulty in seeing it from a distance. The widow, Mary Pickersgill, was a flag maker. She made a standard-sized garrison flag with 15 stars and stripes.

On September 13, 1814, British warships sent a downpour of shells and rockets onto Fort McHenry. The British attacked the American fort for 25 hours straight. However, the British saw the flag still flying at dawn.

Francis Scott Key also saw the flag flying above the fort. This inspired him to write “The Star-Spangled Banner” which became the national anthem.”  The words tell the story, “And the rockets’ red glare, with bombs bursting in air, gave proof through the night, that our flag was still there.”

The War of 1812 ended with the treaty of Ghent. In it, it said that all ships and prisoners were to be released. All lands returned to former boundaries.

This war changed the course of American history. America had brought the world’s greatest military power to a virtual standstill and gained international respect. Many Americans celebrated the War of 1812 as a “second war of independence” with patriotism on the rise.

So, Homeschoolers: your vocabulary words to look up today are impressment, fort, star, spangled, and banner.

Older students: Write each vocabulary definition 5 times. Sketch an illustration and write a short summary. Imagine you are Francis Scott Key. Record your observations of what you see.