Hello everyone from “History in 3 Minutes Podcast.” Welcome back! Today, let’s take a look at “The War to Independence.” During this time, events such as the Declaration of Independence and the Battle at Yorktown led to other nations recognizing the United States as a sovereign nation. 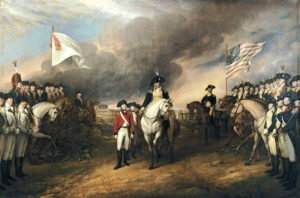 The next section is a list of grievances against the British government. The Resolution of Independence claims the colonies were free and independent states. The final section was for the Signers of the Declaration. The signers, as representatives of the American people, declared the colonies independent from Great Britain on July 4, 1776 with most of them signing the document on August 2nd.

However, there were still battles to be fought. The last major battle in the Revolutionary War was fought in Yorktown, Virginia in the fall of 1781. General Cornwallis became trapped in Yorktown. General Washington closed in on land while the French navy blocked any escape by sea. Finally, on October 19, 1781, General Cornwallis and his 8,000 British troops surrendered.

Parliament voted to end the war after hearing of their defeat at Yorktown. On November 24, 1783, the last British troops left American soil. Now America was finally free from British oppression.

So, Homeschoolers: your vocabulary words to look up today are natural rights, grievances, General Cornwallis, Battle of Yorktown, and oppression.