Droughts out west? Flooding in other areas? Well, folks, that’s because it looks like we are in the beginning of a solar minimum (cycle 25) since December of 2019. Like most scientific issues, there is much debate over the solar cycle. Let’s look at some fascinating facts. Did You Know? 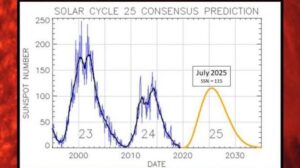 Homeschoolers: Sketch/color an illustration. Write the words “solar minimum” ten times. Write the definition in your own words. Theme: weather. Finish this sentence: My favorite season is… Read the story called Chicken Little.  Explain why Chicken Little said, “The sky is falling.”✍️