Today, let’s take a look at “New Ideas, 1660-1775.” During this time, a revolution, a period of enlightenment and a great awakening came to America. 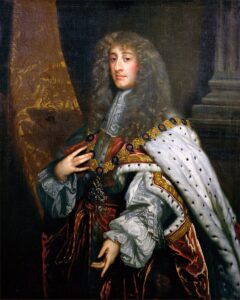 When Charles II became king in 1660, he brought with him new ways to keep the colonies under his control. First, he told Parliament to pass the Navigation Acts. This allowed only English ships to export and import goods with the colonies. The Staple Act required all ships with imports to first pay taxes in England before arriving in the colonies. Goods became quite expensive.

James II succeeded his brother Charles to the throne. He disregarded Parliament and became a practicing Catholic. Parliament was offended and asked Mary (the daughter of James) and her husband William to claim the throne. James fled and the time of the Glorious Revolution began. William and Mary gave the people back the right to assemble and freedom to worship. As monarchs, they also accepted the English Bill of Rights of 1689 which protected their subjects against cruel and unusual punishment.

In 1689, during the Age of Enlightenment, John Locke wrote that people had natural rights in “Two Treatises of Government.” Locke said that in a social contract people agree to give up a particular freedom in order to gain something back like government protection. Jean-Jacques Rousseau said the government should be formed by the consent of the governed. In 1748, Baron Montesquieu said there are three forms of government-executive, legislative and judicial.

From 1730-1740, ministers began holding revivals during the period called the Great Awakening. People renewed their Christian faith with many people joining the Baptist, Presbyterian, and Methodist churches.

So, Homeschoolers: your vocabulary words to look up today are navigation, economics, natural, rights, and awakening.

Older students: Write each vocab. definition 5 times. Sketch an illustration and write a short summary. Create a pamphlet with a timeline.