Today, let’s take a look at “The Growth of Colonial America.” Trade within and between the colonies helped each region grow. 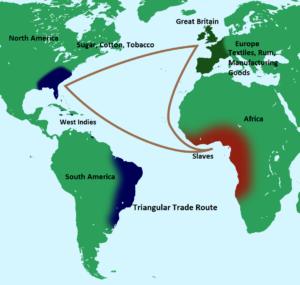 Trade between the countries also grew. The Triangular Trade route was based on the winds and currents of the sailing ships. The ships from Great Britain in Europe carried textiles, rum, and manufactured goods to Africa to trade for kidnapped Africans which were transported across the Atlantic. The ships from America carried sugar, tobacco, and cotton to Europe. The ships from Africa took slaves to Europe and the Americas. It was at the Middle Passage where slaves were first taken to the West Indies.

How did this system work? Warring African tribal leaders invaded other tribes taking captives. They, in turn, sold the captives to the Europeans for goods. After they learned the terrain, the Europeans began kidnapping the natives themselves.

A hierarchy developed in America. At the top were a small number of wealthy merchants who controlled the trade. Below them were the artisans or skilled workers, innkeepers, and retailers. The lower class were the people without skills or property. At the very bottom were the indentured servants and slaves.

A diverse society developed. Married women had less rights than single women. Only single women could own property and make contracts. Immigrants came to the larger cities such as Philadelphia and New York for greater opportunities.

So, Homeschoolers: your vocabulary words to look up today are textiles, triangular trade, tribal, hierarchy, and artisans.

Older students: Write each vocabulary definition 5 times. Sketch an illustration and write a short summary. Create a pamphlet on the Growth of Colonial America with a map.