Hello everyone from “History in 3 Minutes Podcast.” Welcome back! Today, let’s take a look at “The Crisis Deepens.” A dispute over slavery led to the Underground Railroad, Dred Scott case, and John Brown Raid. 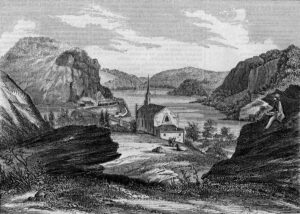 The Underground Railroad was a network of “safe houses” for those who were trying to escape slavery. This informal and well-organized network of abolitionists helped thousands flee north to safety. Hiding places included private homes, churches, and schoolhouses. Those who helped lead this cause were called “conductors.”

One of the most famous conductors was called Harriet Tubman (1820-1913). Harriet was born into slavery in Maryland. She escaped to freedom in Pennsylvania in 1849. Harriet gave many escapees food and shelter along their journey to freedom.

The Kansas-Nebraska Act was passed by congress in May 1854. The majority in Kansas wanted to become a slave state. Those in Nebraska wanted to become a free state.  Then Kansas entered into a territorial civil war. Outsiders described the scene as “Bleeding Kansas.”

Next came the Dred-Scott case of 1857. Dredd Scott was a slave from Missouri who escaped in the north. After he was recaptured, he sued saying that living in a free territory made him a free man. The court ruled that he was not free. Democrats cheered this ruling. Republicans called it a “willful perversion” of the Constitution. This supreme court ruling further divided the country.

John Brown was an abolitionist living in Kansas. In 1859 he seized a federal arsenal at Harpers Ferry, freed the people, and lead a rebellion. The U.S. Marines captured him. John Brown was sentenced to death. Those he had helped referred to him as an “angel of light.”

So, Homeschoolers: your vocabulary words to look up today are Underground Railroad, conductors, case, ruling, and Harpers Ferry.

Older students: Write each vocabulary definition 5 times. Sketch an illustration and write a short summary. Imagine you are living during the time of the Underground Railroad. Explain what you would do and why.