Hello everyone from “History in 3 Minutes Podcast.” Welcome back! Today, let’s take a look at “Judicial Review and the Louisiana Purchase.” When Thomas Jefferson became president in 1801 one of his first priorities was to appoint new federal judges and expand the territory of the United States. William Marbury had been previously appointed Justice of the Peace in the District of Columbia by former President Adams. Marbury had already been approved by the senate, but it did not become official until he received his commission. So, Marbury sued the new Secretary of State, James Madison, in order to obtain his commission. Marbury petitioned the Supreme Court to compel James Madison to deliver the document. 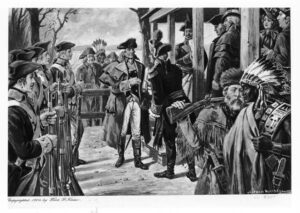 Marbury v. Madison of 1803 became a landmark case. In it, Chief Justice Marshall established the principle of judicial review or the power to declare a law unconstitutional. The Supreme Court ruled that it did not hold the power to compel the Secretary of State (Madison) to deliver Marbury his appointment to the court. However, the Supreme Court also said it was illegal for Madison to not deliver the document. As a result of this ruling Marbury never became a federal judge.

So, Homeschoolers: your vocabulary words to look up today are judicial, review, Louisiana, territory, and treaty.

Older students: Write each vocabulary definition 5 times. Sketch an illustration and write a short summary. Imagine you are a Supreme Court Justice. Write down which laws you think are constitutional or unconstitutional and why.