Hello everyone from “History in 3 Minutes Podcast.” Welcome back! Today, let’s take a look at “A New Constitution.” During this time, events leading up to the new constitution included debate and compromise, checks and balances, and an amendment procedure for future revisions. 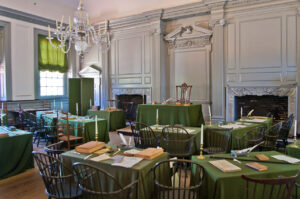 Every state, except Rhode Island, sent delegates to Philadelphia in May 1787 to revise the Articles of Confederation. Instead, they ended up abandoning the Articles and setting up a new constitution. This meeting became known as the Constitutional Convention.

This new constitution was based on the principle of popular sovereignty or rule by the people with elected officials to speak for the people. It also was based on federalism which divided power between the federal and state governments.

Finally, the judicial, legislative, and executive powers were created. The purpose of this was to ensure checks and balances to prevent any one of the three branches from becoming too powerful.

The delegates realized that the Constitution might need to be revised over time. They established a two-step process for amending the Constitution. The first step is the proposing of the amendment. The second phase is the ratification of the proposal.

So, Homeschoolers: your vocabulary words to look up today are convention, population, checks, balances, ratify.