Hello everyone from “History in 3 Minutes Podcast.” Welcome back! Today, let’s take a look at “A Young Nation.” During this time, events such as state constitutions, individual liberty rights, and the Articles of Confederation helped the United States of America develop as a new nation. 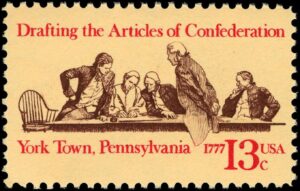 Each state developed its own constitution. For instance, the earliest state constitutions such as Virginia (1776) and Massachusetts (1780) became models for the other states to follow.

The right of individual liberty became an important issue in state legislatures. In the Virginia Statute for Religious Freedom (1786), Virginia no longer had an official church. Virginia also stopped collecting taxes for individual churches.

On March 2, 1781, state leaders came together to ratify a new form of government called the Articles of Confederation. At this time, congress was made up of each state having only one vote. Most powers required the approval of at least nine of the states.

The 13 states under the Articles of Confederation eventually passed the Northwest Ordinance of 1787. This plan governed the lands west of the Appalachian Mountains and north of the Ohio River. Certain rights were guaranteed including freedom of religion, property rights, and the right to trial by jury. Slavery was prohibited.

There were pros and cons with the Articles of Confederation. The pros were that congress could make treaties, petition the states to meet military obligations, coin and borrow money, and settle disputes between the states. The cons, however, under the Articles of Confederation were that the states did not have to respect the treaties, or meet military obligations, and there was no way to collect taxes from the people. It could not even stop the states from issuing their own currency.

This weakened the economy and led to a severe recession. Poor farmers were hit hard. A bankrupt farmer named Daniel Shays from Massachusetts led a protest called Shay’s Rebellion in 1787. This incident showed the weakness of congress to solve the nation’s problems. The result was that many people began calling for a stronger central government.

So, Homeschoolers: your vocabulary words to look up today are treaties, liberty, confederation, Shays, and rebellion.