Why not vote? Voting is a privilege and duty. As a citizen, you have the right to vote. It is your duty to become informed with research, study it out in your mind, and use prayer to help you make the best decision. 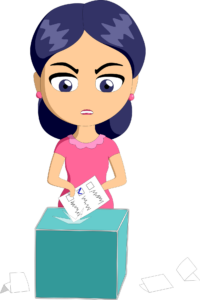 Initially, only the property owners, then the African Americans, and finally women were able to vote. In the 2016 presidential election the state voter turnout ranged from a mere 42.52% of voters in Hawaii to 74.16% in Minnesota for a total of 58.1% of all eligible people voting in the United States.

Homeschoolers: Create a voter turnout chart and explain why you think voting is important.