Did you know Thurgood Marshall became the first African American Supreme Court Justice in 1967? Previous to that appointment, Marshall had won 29 of the 32 cases that he argued before the Supreme Court. Marshall was the brilliant lawyer that won the Brown v. Board of Education of Topeka (1954) case which ruled school segregation unconstitutional. Marshall received valuable experience with appointments by Presidents Kennedy and Johnson. The first president appointed him to the 2nd Circuit of the U.S. Court of Appeals and the latter to the U.S. Solicitor General in 1965.

Word searches develop spelling skills, extend vocabulary, and emphasize pattern recognition. Find all the hidden words! Enjoy replaying one of your favorite word searches. Each time you replay it, the words are reordered to make it more challenging. 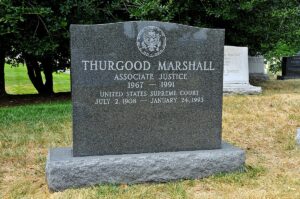 1. To view vocabulary words in the boxes below the puzzle, click on each box.
2. To play, click on the first letter of the word and then click on the last letter of the vocabulary word to highlight the entire word in the puzzle.
3. Words may be found going forward, backward, up, down, or diagonally.
4. After each vocabulary word is found, each word in the box will have a slash through it if clicked on.
5. Once you have completed the word search, a message will say “CONGRATULATIONS! YOU WIN!”
6. Have fun!

Homeschoolers: sketch/color an illustration. Give your picture a title. Theme: diligence. Read the exciting story called “The Tortoise and the Hare” in Learning to Read: Favorite Fairy Tales (Kindle/Audio/Paperback). Describe the Tortoise’s adventures. How did the Hare win the race? What did Thurgood Marshall accomplish? Write about your goals.