What is the “Jericho March?” In the book of Jericho, it says the Israelites were led by Joshua into the land God promised them. They crossed the Jordan River to conquer the land called Canaan. Jericho was a city of false gods. Joshua led a silent march around the walled city once a day for six days straight.

Then on the seventh day the Israelites marched around the city seven times with seven priests, placed ahead of the Ark of the Covenant, carrying seven ram’s horns. On the seventh march around the city walls the priests blew their horns in unison. Then the people gave a great shout. When they did this, the fortress walls of Jericho fell flat to the ground allowing the Israelites to enter the city. With God’s help and the Israelites obedience, the walls of Jericho came tumbling down. Have faith that the Lord hears your every prayer because He will intercede for you. 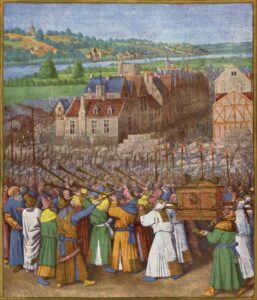 16And it came to pass at the seventh time, when the priests blew with the trumpets, Joshua said unto the people, Shout; for the LORD hath given you the city.

Homeschoolers: draw/color an illustration and write these Bible verses in your own words.