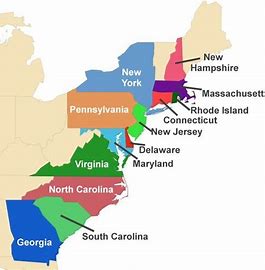 The Middle Colonies were Delaware, New York, New Jersey, and Pennsylvania. The Middle Colonies had fertile land which resulted in a long growing season. Wheat became the region’s main cash crop. It also had a growing industry of fishing and timber. In 1681 William Penn created a new colony which became known as Pennsylvania. King Charles II seized the land called New Netherlands from the Dutch and gave it to his brother the Duke of York. It was renamed New York.

The Southern Colonies were Virginia, Maryland, South Carolina, North Carolina, and Georgia. Agriculture was the focus of the southern colonies made up of small farmers and large plantation owners. There was plenty of land but not enough workers. Many poor English people came to America as indentured servants. Large tobacco plantation owners relied on African slaves and indentured servants to work the fields. A small farmer named Nathaniel Bacon led a rebellion called Bacon’s Rebellion. He led the fight for the rights of small farmers to buy good land and compel the governor to protect small farmers against hostile native Americans.

The New England Colonies were Massachusetts, Connecticut, Rhode Island, and New Hampshire. In 1636, Roger Williams founded Providence, Rhode Island as a place of religious toleration. Lord Baltimore established Maryland in 1634 as a refuge for Catholics.

So, Homeschoolers: your vocabulary words to look up today are wheat, timber, agriculture, plantation, and refuge.

Older students: Write each vocabulary definition 5 times. Sketch an illustration and write a short summary. Create a pamphlet on the three types of colonies with a map.