Hello everyone from “History in 3 Minutes Podcast.” Welcome back! Today, let’s take a look at “The Road to War.” During this time, events such as the Boston Tea Party, the minutemen, and a pamphlet called, “Common Sense” all led to the Declaration of Independence. 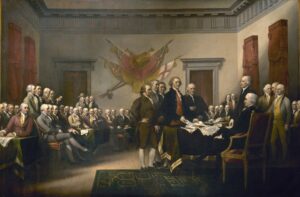 Thomas Jefferson instructed the patriots to create committees of correspondence. To fight the British, the pen became their weapon of choice to share when and where to meet. On December 16, 1773 patriots dressed up as Mohawk Indians, marched to the harbor and boarded three trade ships which carried a cargo of tea. The protesters threw the 342 chests of tea overboard into the water. Why? This was a protest against the Tea Act which made them pay a high tax on tea. This was not fair to the colonies as they were not represented in the British Parliament and did not have a say on the taxes.

The British responded with more taxes and sent troops to control the colonial governments. The town of Concord created a special unit of minute-men who were trained and ready to fight within a minute. On April 18th, 700 British troops arrived to overtake the colonies. Paul Revere spread the message, “The British are coming, the British are coming!” which alerted the patriots to come to battle. The British were surrounded at Concord. George Washington became the general and commander in chief of the Continental Army.

The fighting spread and Thomas Paine wrote a pamphlet called, “Common Sense” published in January 1776 urging everyone to join the cause of freedom. Thomas Jefferson drafted a document for the colonies to dissolve all ties with Great Britain called the Declaration of Independence. On July 4, 1776, the full Congress issued the Declaration of Independence. With this document the colonies proclaimed themselves the United States of America and the American Revolution formally began.