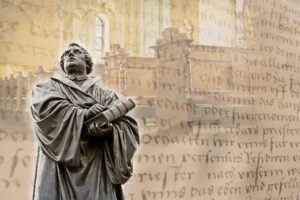 This man was born in France and went to college to originally become a humanist lawyer. He broke away from the Roman Catholic Church around 1530. He wrote the book, Institutes of the Christian Religion, which was a defense of his faith. In it he explained his belief in justification by faith alone, emphasizing the grace of God and the doctrine of predestination.