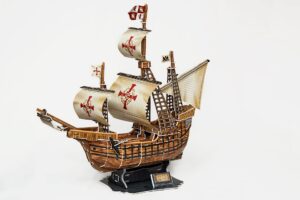 Today, let’s take a look at “The Man Called Christopher Columbus.” He was born October 31, 1451 and died May 20, 1506. We want to specifically take a look at how his life was a preparation to discover America.

Christopher Columbus was once a little boy growing up in the streets of Genoa, Italy. His father, Domenico, was a wool weaver. Christopher helped his father who also owned a cheese stand. He had three brothers, Bartolomeo, Giovanni, and Giacomo, and a sister was named Bianchinetta. When Christopher was only 10 years old, he went to work on a ship. From an early age, Christopher adopted the hard-working ethic that is so common among those who are successful.

In 1473 Columbus began his apprenticeship as a nautical business agent continuing his experience of the ocean currents. He married Filipa and they had a son called Diego.

Christopher Columbus was an avid reader. He read the Bible, and books about geography, astronomy, history, and Marco Polo. He also taught himself Latin, Portuguese, and Castilian. You can say he was a self-schooled man.

Meanwhile, trade competition between the European countries grew when the land route to Asia became more dangerous because of the fall of Constantinople. Queen Isabella had heard of Columbus and offered him a sponsorship to find a sea route to Asia. In August 1492 Columbus left Spain and set sail with three ships, the Nina, the Pinta, and the Santa Maria. On October 12, 1492 Columbus sighted land and discovered America. Columbus named the land San Salvador after, and in honor of, Christ the Savior.

So, Homeschoolers: your vocabulary words to look up today are Columbus, San Salvador, Santa Maria, Queen Isabella, and nautical.

Older students: Write down the definitions 5 times. Sketch an illustration and write a short summary. Create a timeline.