Did You Know? July 4th is also known as Independence Day. On this day, we celebrate the anniversary of the Second Continental Congress adopting the Declaration of Independence on July 4, 1776.

At that time, Congress was made up of delegates from the United States’ original thirteen colonies. They unanimously approved the document that declared independence from Great Britain. Let’s celebrate America’s independence! You can party, get involved in service projects, or do something with your family. Whatever you do, let’s give thanks for the patriots that fought for our independence! More fascinating facts – 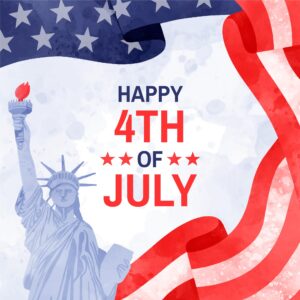 Homeschoolers: Sketch/color an illustration. Theme: patriotism. Read the story called The Happy Prince and describe how the prince was a patriot.